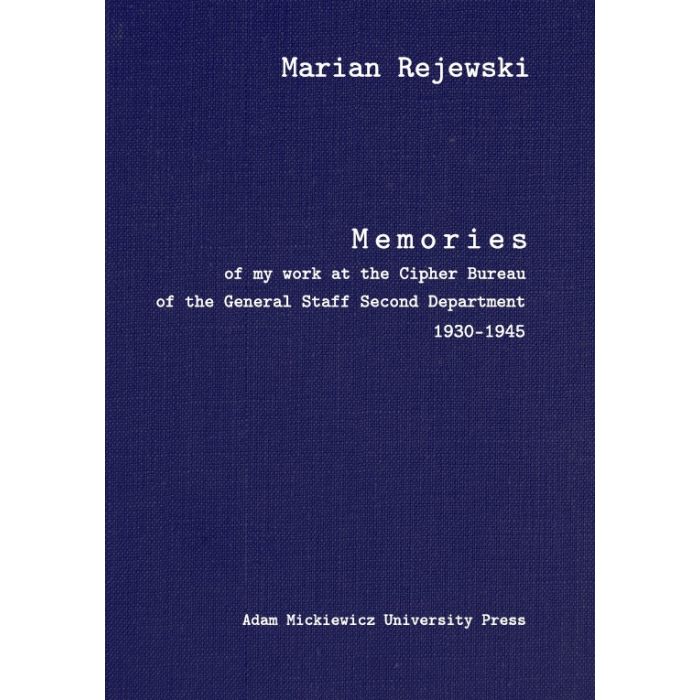 The year 2010 marked the thirtieth anniversary of the death of Marian Rejewski, a distinguished graduate and academic of the Faculty of Mathematics and Natural Sciences at the University in Poznan. The memories of Marian Rejewski constitute an exceptional opportunity to get a first hand account of the mathematical adventure connected with breaking the ciphers of the most famous ciphering machine ever, the German Enigma.
Marian Rejewski was the leader of a team, including three graduates of Poznan University, who revolutionized cryptology. While working for the Cipher Bureau of the Polish Armed Forces General Staff, Rejewski, together with Jerzy Rózycki and Henryk Zygalski, broke Enigma ciphers by applying an innovative and original set of instruments based entirely on mathematical methods. They shared the methods of breaking ciphers with their French and British allies. Although historians are not unanimous in their assessment of the impact of the Polish cryptologists on the course of events in World War II, even the most cautious opinions admit that their success contributed to shortening the war by at least two years.
Many years later, in a letter to a friend from his university studies, Rejewski wrote with touching modesty: There seems to be a lot of fuss around our breaking of the Enigma. Yet, we did not do anything but applied the knowledge which as first year students, we had learned from Krygowski and Abramowicz.

However, the road to well deserved fame covered by Marian Rejewski and his colleagues was long and not easy. For many years their achievements remained unrecognized and, then, they have slowly, with difficulties penetrated not only into the European but even Polish historical awareness. To pay tribute to the three cryptologists and to strengthen the intellectual bond with its distinguished graduates, Adam Mickiewicz University has published the memories of Marian Rejewski in this book.

Cryptography, the science of ciphering, does not have very many practitioners. There were not even ten qualified cryptographers to be found in inter-war Poland. Several of them lost their lives during the war, some others, if they have not died since the war, have become scattered throughout the world. At present [in 1967] I am, almost certainly, the only representative of the pre-war group at home in Poland. During World War II, when contact was maintained mainly by radio, ciphers played a considerable role. They constituted a sui generis type of weapon. The Poles played an extremely important part in effectively utilizing this weapon in the war against the Germans. Their work was carried out mainly at the Cipher Bureau of the General Staff Second Department and at its subsequent counterparts. On the pages below, I have tried to present all that was known to me, and what has not yet slipped from my memory, about the work and successes of our unit in dealing with German ciphers before and during the war.