Constitutional barriers to the applicability of private law in the public sector. A comparative study with particular emphasis on Polish and German law (PDF) 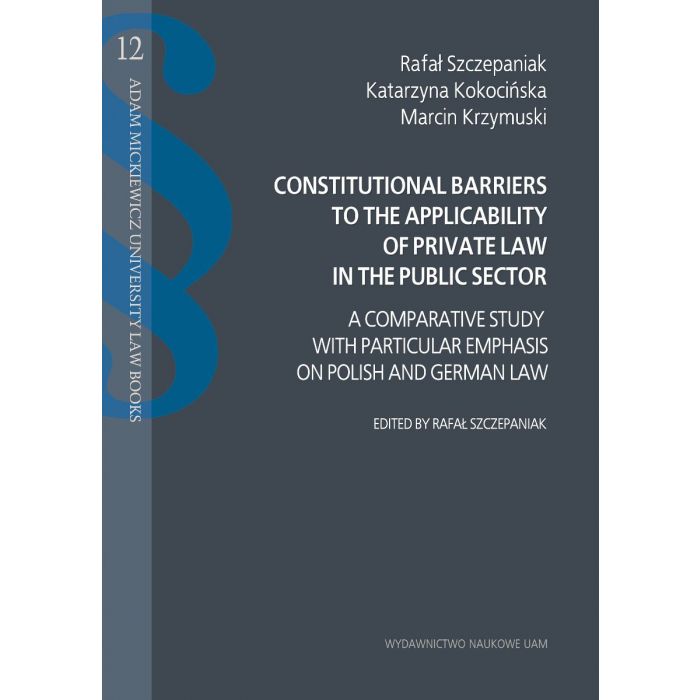 The underlying assumption of this book is that in the special environment that is the public sector, certain features of what we call civil law manifest themselves with particular force through contrast. An analysis of the application of civil law in the public sector is somewhat akin to an “intellectual journey to the source of the Amazon.” If one seeks a new, fresher view on civil law institutions and the civil law method of regulation, then this possible precisely through observing how they are applied in this particular environment. Observation of the application of the institutions of civil law provenance in the public sector actually prompts one to conduct a detailed analysis, which can be described as a kind of "anatomy of civil law." It involves analyzing individual civil law institutions and arrangements, discovering their nature and the fundamental elements they consist of, as well as identifying the axiological and praxeological foundations that contributed to their development. The analysis carried out in the monograph indicates multiple relationships between civil law and constitutional law. The authors hope that this monograph will contribute to clarifying the relationship between these two branches of law.

In this monograph, the authors raise the question whether, in the light of the provisions of the current Constitution, there are barriers standing in the way of using private law in the public sector. The authors respond in the affirmative to the question formulated in this way. In their opinion, due to the specific nature of the State and other public entities, some of the institutions of civil law lose their raison d'être in the public sector, and the nature of others undergoes change to a lesser or greater extent. This phenomenon can be observed, for example, in the sphere of exercising subjective rights by public entities, in the sphere of their tort liability, in their legal capacity and freedom of contract, as well as in relation to such institutions of law as unjust enrichment. The legislator and the public bodies applying these laws, in particular the courts, should take this phenomenon into account. Otherwise, there may be violations of the standards of the democratic state of law, including the constitutional rights and freedoms of citizens. In conclusion, the authors consider the need for developing a sub-branch of civil law which would find its application in the public sector.

PART I
MAIN METHODOLOGICAL AND THEORETICAL PROBLEMS RELATED TO THE APPLICATION OF PRIVATE LAW IN THE PUBLIC SECTOR (R. Szczepaniak)

Chapter 1. Linguistic determinants of research on the application of private law in the public sector
I. Introduction
II. Classification of languages within the field in question
III. Problems of comparative nature
IV. Lack of conceptual precision in research on the application of private (civil) law in the public sector
1. Problem with concepts in which the adjective “public” appears
2. The problem of internal stratification of the tort liability of public authorities
3. The attribute of “public law”
V. An attempt to systematize concepts
1. Initial assumptions
2. “Public sector,” “public entity,” “public administration”
3. Occam’s razor method
1) “Entity of public law” (“legal person under public law”)
2) The concept of “Fiskus” (in the Polish language of civil law “Skarb Państwa”) as the state operating in the area of private law
3) The division into public and private law
4) The non-dichotomous nature of division into public and private law
5) Breaking with the division into actes d’autrorité (acts of authority, imperium) and actes de gestion (corporate acts, dominium)
VI. Risk of manipulation through interference in the semantic rules of the languageof legal acts and legal language
VII. Conclusions

Chapter 2. Division into public law and private law in the context of constitutional axiology
I. Introduction
II. Ideological and constitutional dimension of the division
III. Other reasons for cultivating this division
IV. Autonomy of individual branches of law
V. Factors weakening the division into public and private law
1. Challenging the methodological correctness of this division 73
2. Criticism of ideological (political) approach
VI. EU law
VII. Polish version of the division into public and private law
1. Introductory remarks
2. The principle of unity of civil law in Polish conditions
3. Difficult transition from the previous legal system
VIII. Criteria for distinguishing between private and public law or (Germ. “oder”) critera justifying cases of derogation from general law (civil law)
1. Introductory remarks
2. The subjective criterion versus the criterion of interest
3. The subjective criterion versus the criterion of subordination
4. Public entities using private entities in performing their tasks
IX. Conclusions

PART II
PROBLEMS OF CIVIL LAW FORMS OF ADMINISTRATION ACTIVITY FROM THE POINT OF VIEW OF A REPRESENTATIVE OF THE SCIENCE OF PUBLIC LAW
(K. Kokocińska)

Chapter 2. On the penetration and interaction of law
I. Auxiliary application of private law provisions
II. Problems of borderline areas in law

Chapter 3. Private law in administration activities
I. The concept of shaping of legal relations on two levels as a consequence of using different forms of action in terms of their legal nature
II. Administrative private law (Verwaltungsprivatrecht)

Chapter 6. Set-off in public sector
I. General considerations
II. Poland
1. Introduction
2. Analysis of selected cases of set-off in the public sector
1) Set-off of tax liabilities
2) Set-off of public funds constituting non-tax budgetary receivables of public-law nature
3) Set-off based on the Act on Social Assistance
4) Set-off on the basis of the Act of 9 May 2008 on the Agency for Restructuring and Modernization of Agriculture
5) Set-off on the basis of the Act on the principles of management of state property
3. Differences between set-off under the Civil Code and in the public sector
4. Possibility of applying the provisions of the Polish Civil Code regarding set-off in the public sector. Conclusions
III. Germany
1. Preliminary considerations
2. Public law set-off sensu stricto
1) Preliminary remarks
2) Set-off in tax law (§ 226 AO)
3) Set-off in social affairs (§ 51 SGB I – Sozialgesetzbuch)
4) Other provisions
3. Set-off based on general principles
1) Introduction
2) Legal basis for set-off
3) Admissibility of set-off
4) Mutual and homogeneous claims
5) Maturity and enforceability of claims
6) Declaration of set-off
7) Consequences of set-off
IV. General conclusions regarding Polish and German law

Chapter 7. Charging of interest for delayed payment in the public sector (Selected Issues)
I. Polish Law
1. Introduction
2. Charging interest in the event of a delay in the payment of the awarded trial costs
1) Introductory remarks
2) Arguments for and against interest on costs of legal proceedings not paid in due time
3. Charging of interest for delayed payment as the guiding principle of the entire legal system
4. Interest in tax law and public finance law
5. Conclusions
II. German law
1. Principles regarding the interest rate on cash liabilities resulting from public-law titles
1) Introductory remarks
2) The legal basis for charging interest
a) § 49a (3) sentence 1 VwVfG
b) Other provisions
2. Application of civil law provisions
1) Introductory remarks
2) Late payment interest (§ 286 BGB in conjunction with § 288 BGB)
3) Interest on litigation costs (§ 291 BGB)
4) § 818 (1) BGB
5) § 849 BGB
6) § 839 BzGB in conjunction with art. 34 GG 481
3. Limitation of claims for payment of interest
4. Court proceedings
III. General conclusions resulting from the analysis of German and Polish law

Chapter 8. The application of Actio Pauliana to tax obligations
I. Introduction
II. Polish law
1. Evolution of views
2. The autonomy of tax law and the division of the legal system into public law and private law
3. A reference to French solutions
4. The issue of prohibiting the use of civil law by analogy to the detriment of citizens
5. The issue of the method of applying civil law provisions: directly or by analogy
6. Other arguments against the application of Actio Pauliana to tax liabilities and polemics with them
III. Actio Pauliana in German tax law
1. Sources of law
2. Legal basis for the use of AnfG in the enforcement of tax liabilities
3. The situation before the introduction of § 191 subsection 1 sent. 2 AO
4. Constitutional doubts
1) Introductory remarks
2) Violation of art. 101 section 1 sent. 2 of GG
3) Violation of the principle of equality
4) Violation of art. 20 section 3 GG
5. Amendment of § 191 subsection 1 AO and its effects
6. Rules for issuing a decision ordering a third party to tolerate executions (Duldungsbescheid). Premises for issuing an administrative decision
7. Direct effects
8. Systemic effects
9. Conditions for raising an allegation (para. 9 of the AnfG)
10. The admissibility of filing of an action under §§ 11, 13 AnfG by the tax authorities
IV. General conclusions resulting from the analysis of German and Polish law

PART IV
THE CURRENT STATE OF CIVIL LAW METHODOLOGY FROM THE PERSPECTIVE OF ANALYSES OF THE APPLICATION OF PRIVATE LAW IN THE PUBLIC SECTOR (R. Szczepaniak)

Chapter 1. The effectiveness of civil law methodology and the specifics of the public sector

Chapter 2. From the Fiscus Theory to the concept of horizontal effect of fundamental rights

Chapter 5. The sense of distinguishing the civil law of the public sector as one of the civil (private) law sub-branches